Fueled up by excitement,  I woke up before my alarm clock went off and headed straight to the shower. By around 8:30am, we were already getting off the Jinsari- Pyeongtaek route bus and ready to hit the subway. Suwon station is ten stations away from Pyeongtaek station (Korail Line 1). After getting off at Suwon, we waited for bus #66. Travel time from Suwon to Everland shuttle bus pick up point will take around 1 hour and 20 minutes to 1 hour and 40 minutes. From there, you will have to transfer to Everland's shuttle bus for another 10-minute ride to Everland's gates.
Admission rate for adults is usually 44,000 KRW but they sometimes offer discounts on holidays. If you are a foreigner, print out the discount coupon from their website and present your passport at the ticket office for an 8,000 KRW discount.
Everland Theme Park is divided into five areas. The Global Fair, American Adventure, Magic Land, European Adventure and Zoo-Topia. Their names are somewhat a giveaway of what area theme is but still, be preapared to see more than you expect to see from them.
We walked around Global Fair after we got through the gate, saw some snowmen and got enchanted by this giant Snow Magic Tree and its giant snowflakes and Christmas balls. It somehow reminded me of the movie Avatar while the Pororo 3D adventure reminded me of my nieces and nephews because of Pororo's fame back home.

For energy boost, we stopped at Burger Cafe America for some Premium Big Burger, chicken balls, fries and hot chocolate.
Wandering around the American Adventure area led us to the lift going to Carnival Square. I took lots of pictures of my husband, forgetting I was the one he's giving a tour. My frostbit husband, by the way, bought his gloves for 20,000 KRW at a kiosk  near the Snow Magic Tree, since it got too cold as we entered the park. Quite expensive, if you ask me, considering I find lots of knitted mufflers, caps and gloves in Manila and Baguio City for only 3 to 10 USD.


The lift takes only a few minutes to get you to the Carnival Square. A very short ride for a spectacular view of the park. It makes me want to go back in the line of other guests with their teeth chattering because of the crisp winter breeze.
A few steps more took us to Zoo-Topia. Seeing polar bears and  penguins is like a dream for somebody who grew up in the tropics. The animals seem to know how to entertain their guests. The polar bears kept on nodding at us, the penguins and  stellar sea lions suddenly made lots of noise and took a plunge into the water and swam like Olympic swimmers back and forth.

A big part of Zoo-Topia is closed on winter since a lot of animals wouldn't survive the season. What a shame! I really wanted to experience Safari World where I can ride a  van and have a  close
encounter  with the tigers, bears and more. I was also excited about the Amazon Express and get on a big tube for a ride along the man-made rapids. Even the Animal Riding area is closed during winter. I realized guests miss out on a lot of attractions if you go there in winter. Good thing my husband agreed to go back in fall. Imagine my smile when he said, yes! I'll be spending halloween in Everland next time. I can already see the autumn colors in my head. And I am curious of what the Halloween Parade will be like.

Near Zoo-Topia is an igloo, maze and iceberg which seemed to be made of fiber glass at the snow covered Snow Village so we played around a little. I kinda wished my nieces and nephews were with us.

Across the Snow Village, a romantic view of the European Adventure took my breath away. It really felt like Europe in there with the buildings' architecture, restaurants and cafes. It's also quite entertaining to see an excerpt from The Nutcracker in Korean.


It was fun checkin' out the Mystery Mansion where you shoot ghosts with LASER guns but the attraction is for the kids. It's not as scary as it looks outside. The Rotating House, on the other hand, is quite enjoyable for everyone. It gives you the illusion of being in a house that is turning up side down while sitting in a room with dim light. Of course I wouldn't pass the chance to get a thrill from the Snow Buster! My husband refused to join me so he could take my pictures. It sort of gave me the chills as I was going up the hill and while waiting on queue, thinking it's gonna be a speedy, scary ride down the hill on a large tube. But it was not! I actually had fun and if only there were only a few people waiting for their turn, I'd give it another go.


We took a longer walk this time after that fun ride. We ended up at the Four Seasons Garden which gave us a real impression of white Christmas. The garden has more than a dozen christmas
trees, hundreds of poinsettia plants, caroling snowmen and The Nutcracker-themed displays. Kids also had fun here throwing snowballs like in Snow Village. We could have stayed a while more in there if only my toes were not freezing. My leather boots lined with synthetic fur is still not enough to let me walk in the snow for a long time, so I walked fast where it is clear of snow. We followed the stairs which led us to Cocina Mario and had an excellent view of the Holland Village and the T Express Roller Coaster. 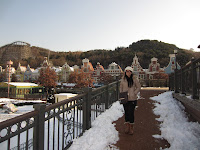 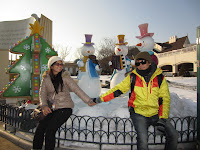 I can't choose which one is my favorite. I get surprised every time we get to another area of the park. Everything about it is so amazing. No wonder a lot of families come back to visit. Especially, that it changes its theme every season.
It was a lovely walk through the Holland Village. It was just the two of us walking and taking silly pictures when a nice Korean park attendant offered to take our 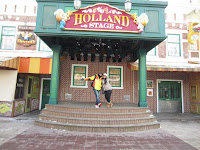 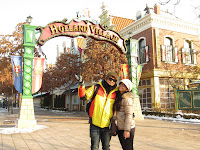 picture at the Holland Stage.
They don't speak English so I had a hard time figuring out what she's trying to say. My husband who knows Korean understood her, so we started posing and pretended we're dancing on the stage.


Near the Holland Village and the Four Seasons Garden is the Rose Garden. Only, there are no roses this time, again because of the season. Everything's covered in snow. But the ambiance made me feel like I'm in a fairy tale.
Magic Land on the other hand will give you the feeling of being in a children's story book by walking through a garden filled with characters from Aesop's fables.
Before it became dark, we had spicy chicken in skewers and soda. The small tables have heaters under their umbrellas, so you don't have to worry about freezing while having snacks at the snack bar. 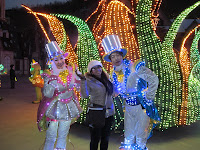 We waited for the highlight of the evening, the parade! From afar, colorful LED lights illuminated the European Village, so we ran to catch what it is. I was the parade! The huge float, mascots and park actors had LED around them. I recognized some of them from The Nutcracker play earlier. Parade music plays as the actors mingle with the crowd.  Park attendants are very accommodating and kind in assisting us where to go and offered to take our pictures. The mascots and the costumes are so adorable. 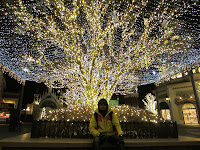 Everland looked like a different park when night came. It's like walking in a tent made of lights.
Don't forget to grab souvenirs from the shops before heading home. They have cute, useful items at the souvenir shops found everywhere in the park. We got cute fruit-scented markers, white tiger flashlight and picture holder and Paul Frank lip balm in Julius' coconut cream and bubble gum flavors with key king. It's funny, but I even brought the cute plastic bag they're in back in Manila.

If you're too tired get on the bus to get home, you may stay at the Home Bridge Hostel for night and maybe check out Caribbean Bay's Wave Pool, Sandy Pool, River Way and water slides the next day.